An old lady got up and going around others seated on the floor she made her way to the front of the tent to tell her testimony. Just the day before, she had come up to be prayed for. I had seen her eyes, whitened out and seemingly scaly with black flecks. She was completely blind, but now she was telling the people she could see.

On the 26th January 2012 my wife and I arrived in Warangal City, India. “Gospel Healing Meetings” had been advertised around the city with thousands of posters, leaflets and banners.

Just a few people had gathered for the first service, which grew to about 150 by the time it finished. That evening more people had gathered. Many were Hindu, there were some Muslim and a mixture of denominational Christian’s along with a few Message believers. At the end of this service those who desired prayer were invited to form a line and have the ministers of the gospel pray for them. It was here that the elderly blind lady came and had prayer.

One Christian woman had a large goitre. I explained to her that the spirit had left the goitre but now the body had to cleanse its self of the growth and she would begin to feel ill in the next few days. This would be a sure sign that she had received her healing.

A Hindu woman came before me for prayer with her son carrying X Rays that showed her filled with cancer from her knees to her head. A doctors report stated that the cancer was terminal and to go home and prepare for death in the next few days. I asked her, that if Jesus Christ healed her, would she accept Him as her Saviour and serve Him. She hesitated, looking at her son and made no reply. I asked again and the translator told her. She looked at her son again and then said, yes she would. I prayed for her.

Possibly 200 people passed through the prayer line that night.

The next day in the morning service the crowd was at about 400 people. Insisting that the local pastor give an opportunity for those who had received their healing to testify of it, I watched as the lady who had been blind walked unassisted to the front to tell how Jesus Christ had healed her.

Later this boy came to me smiling and shaking my hand saying something I couldn’t recognise. An English speaking Christian near me said how that he is learning to speak. He had been speaking Telagu.

Again at the end of service we prayed for the sick with about 300 coming through.

That evening when we arrived at the tent the crowd had suddenly mushroomed to about 1000 people. This hadn’t gone unnoticed by the local vendors who had set up their stalls at the entrance.

After I had preached and we had prayed for hundreds of people, the woman who had the goitre came up on the platform wanting her photo taken showing how much the goitre had shrunk. She was beaming as she said to the interpreter, “Praise the Lord, I feel terrible.” The next day she came without the smile, looking ill saying, “Praise the Lord, I feel terrible.” The day after that she was too sick to come to church.

A man who had leg problems and difficulty walking came to testify of his healing. A boy who had a large lump or growth on his head was pushed forward by his father to show that the lump was gone and his head was normal after being prayed for that morning. Another boy related to the pastor had been unable to talk properly because of the severity of his stutter, came to us with his limited English saying, “I’m better, I’m better.” We were told by others how he could now speak normally.

On the 3rd morning the tent was mostly filled with about 1500 people. Again many hundreds were prayed for after the preaching of the Word.

I had asked if the people could write out their testimonies as this would encourage others, but the ministers said that many of them were illiterate. We were hearing of many who had been healed of fevers and also leg and joint problems. A man who had suffered from ulcers down his left side was completely healed.

Being the dry season, it was clear and sunny and under the white tent, the glare was quite harsh. When the preaching began the glare dimmed off and a cool breeze started to blow, cooling the people.

After the service a brother asked Brother Samson, the pastor if he had seen the cloud that had settled over the tent. He hadn’t. The brother asked if he had felt the cool breeze come into the tent, because that was when it appeared. He had tried to get another brother to see it but the man was concentrating on the preaching and brushed him off. He said the cloud was about the size of the stage and just sat on top of the tent.

A baptismal service was held and about 10 people were baptised in Christian baptism, in the Name of the Lord Jesus Christ according to Acts 2:38. The pastor was moved as he told us how those who had been Hindu would wash off their red dot between the eyes before they went in to the water. The following day another 10 were baptised

The evening service had attracted more people again as the reports of healing and miracles went out.

Again during the Sunday morning service when the preaching began the glare dimmed and a cool breeze began to blow. This time many people saw the cloud sit over the tent. By Sunday evening the crowd spilled out onto the road and was estimated to be about 3000 people and many more were prayed for.

After this convention we did a circuit to the east preaching at 4 churches. At a village church that met under trees we prayed for a man suffering a severe case of hemorrhoids. He was healed. Visitors who came to hear my testimony were reported to have given their hearts to the Lord the following Sunday at Vijayawada, after we had left.

One evening while preaching in a small town near Vijayawada, a tumultuous noise began to get closer down the alleyway leading to the church. It was the sound of riot from a crowd of angry screaming voices. A few of the men quickly got up and went to meet them. As it continued I prayed for this situation and asked for the people’s attention. The noise eventually quietened down. About 30 minutes later it flared up again louder, closer (about 30m, just out of view from us by the neighboring house) and more persistent. There was some banging, sounding like the car being hit. I asked Brother Samson what was happening. He dismissed it with a wave of his hand and told me it was nothing and to continue. Again it died down as the people prayed.

Later we were told this mob of drunk Hindu’s complained the preaching was too loud and wanted it closed down. They threatened to smash the car we had come in and stone the preacher. As the pastor of this church went off to try and sort it out after the service he told us that in the 20 years he had been there, he only had that happen once. Later police had to arrest a number of them.

The day before we flew out I had been scheduled to preach an evening service at village in the Warangal district. Brother Nehemiah had been so moved by the meetings in Warangal City that he decided he would have something similar. He had gone home and starting with 2 Rupee, by faith had 2000 posters printed for morning and evening services. Food was brought for the people, a sound system hired and a hotel room booked. I was told of this change in plan and had to prepare accordingly.

Again the services were held under a canopy as the church building was too small for all the people who had come from the surrounding villages. After these services I asked Brother Nehemiah if he had managed to cover his costs. He said yes, and also gave me an offering.

He also told us how he had many reports of healing's from his congregation who had attended the Warangal City meetings. He was also very happy to report that he saw the people were more dedicated and sincere since that time, praying and studying the Word more.

We were very interested to hear two testimonies from this church which had happened some years ago. We met an elderly man and his wife. The man’s cousin had died from alcoholism. The church got together and prayed and fasted. After three days decomposition had begun and he was rotting but then he came back from the dead. He gave his heart to the Lord and served him for another 2 years. He died in the faith.

One of the boys in the church had become ill and died when he was a baby. The parents took him to the doctor who confirmed his death and told the parents to take him home and bury him. They got the church to pray and today he is alive and well.

Arriving back to Warangal City we heard that the Hindu woman with terminal cancer was still alive and had improved to where she could now take soft diet. She had said she would get baptised when she was able. The pastor’s aunty showed us her lower legs which were normal after being prayed for. The week before they had been grossly swollen. His mother testified that God had healed her shoulder.

A report came in that 4 people who had been present in the service where I told my testimony in Vijayawada had returned back to church on the Sunday morning and given their hearts to the Lord.

Three weeks after returning home from India we are still hearing of people being healed and baptised. Because of the new converts in the area where Brother Nehemiah pastors, he has had to start another church in another village. We heard that brothers went and helped build a shelter from palm leaves for them to meet in.

for a witness unto all nations;

For the kingdom of God is not in word, but in power.

And he said unto them, Go ye into all the world, and preach the gospel to every creature.

And these signs shall follow them that believe; In my name shall they cast out devils; they shall speak with new tongues;

They shall take up serpents; and if they drink any deadly thing, it shall not hurt them; they shall lay hands on the sick, and they shall recover.

And they went forth, and preached everywhere, the Lord working with them, and confirming the word with signs following. Amen. Mark 16:15-20 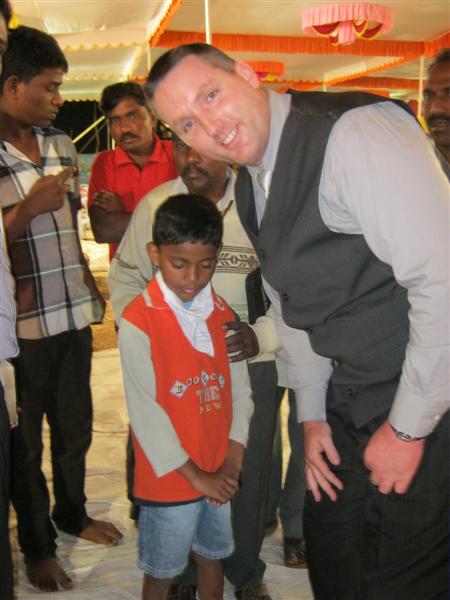 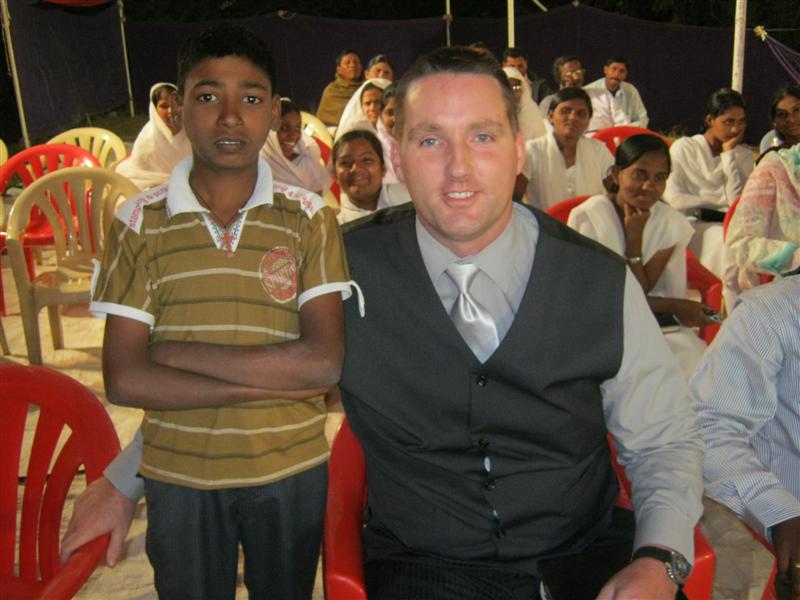 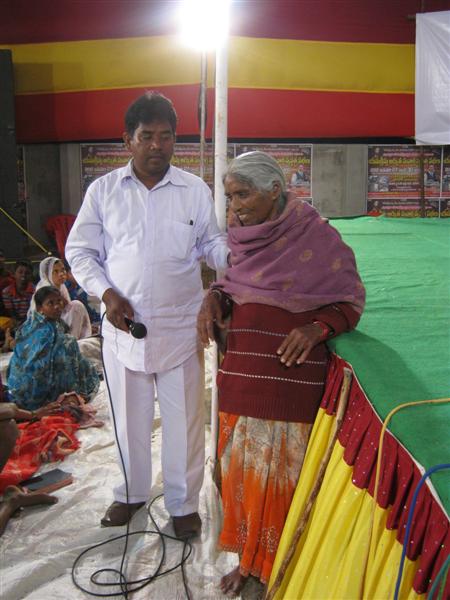